Decentralized autonomous organizations (DAO) are, in fact, highly centralized, as voting power of governance tokens used to make decisions in these organizations is usually distributed between less than 1% of all holders, Chainalysis reports. 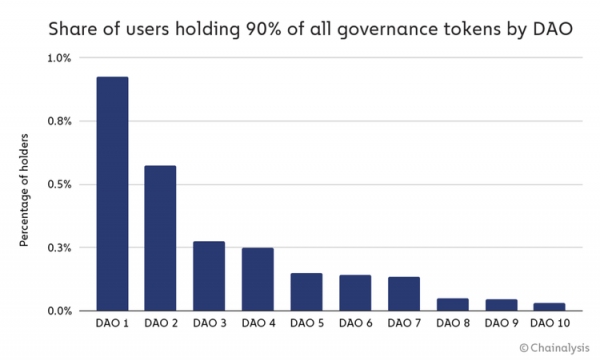 The New York-based forensic firm says this concentration poses risks since this group in theory could outvote the remaining 99% on any decision.

“This has obvious practical implications and, in terms of investor sentiment, likely affects whether small holders feel that they can meaningfully contribute to the proposal process.”

Chainalysis brought up Solend’s case, where the group behind the lending protocol proposed taking control of a crypto whale’s account. The idea behind the move was to liquidate the whale’s big position through over-the-counter desks, as the whale was facing a margin call that could potentially tank SOL’s price.

SEC Clamps Down on CryptoFed DAO Over Misleading Tokens

The group initiated a vote where over 1.1 million voted in favor of the proposal against 30,000 of those who were against that. In reality, the overwhelming majority (over 1 million votes) of votes came from a single user with enormous governance token holdings, Chainalysis says.

This case raises questions about the “ability of a DAO to act in the best interest of all participants when some voters control such an outsized share of governance tokens,” the firm concluded.

Access more than 50 of the world’s financial markets directly from your EXANTE account – including NASDAQ, London Stock Exchange and Tokyo Stock Exchange